History of Forests and Forestry in the Piedmont 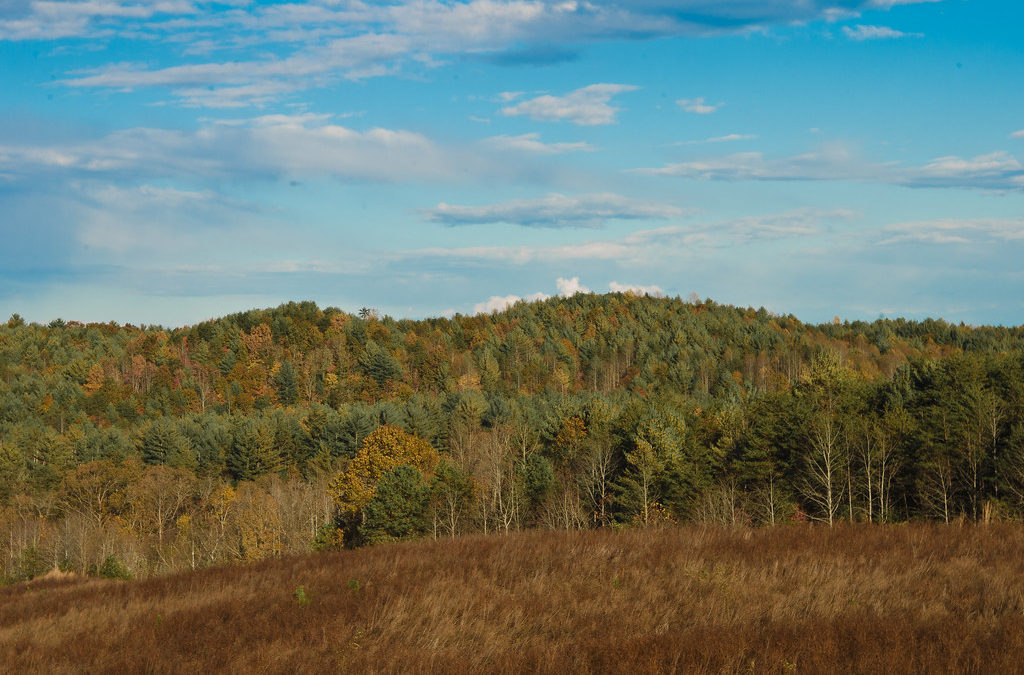 Imagine yourself walking through a forest. You look around to see dense woods and shrubs of all different sizes. Magnolia branches stretch out to meet shortleaf and virginia pine. Hickory bark seems to be pointing upwards towards the tree canopy, where you spot maple and oak leaves lining the sky. The path is soft beneath your feet, covered in a carpet of pine needles, wet leaves, and green new growth, and the air is fresh with the smell of wet earth. Birds sing on all sides, welcoming the ending of a gentle spring rain and filling the forest with their Spring chatter. As you walk through a gap in the tree canopy, the afternoon sun warms you and illuminates the forest floor. To your left blackberry brambles grow up to meet newly established saplings, leaning in towards each other in a race towards the sky. You recall seasons passed, the sweet-tart taste of the berries, their soft plumpness between your fingers as you gather fruit for yourself, your family, and community.

This is what it might feel like to walk through virgin forest in the Piedmont region of North Carolina when the area was solely inhabited by Indigenous peoples. While patches of old-growth forest provide a window into these once expansive landscapes, much of the region has been completely transformed by European colonization and industrial development. At Catawba Run, loblolly plantations, unmanaged clear-cut regrowth and agricultural land replace the original mixed-species forests, but if we slow down and look closely, even places like Catawba Run help to tell the story of  the changes that forestry and farming brought to Piedmont region. 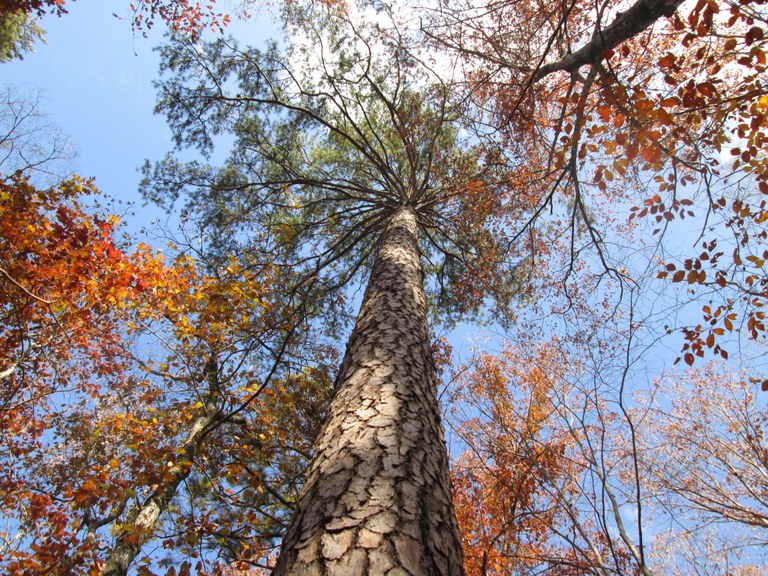 The Catawba Indian Nation inhabited the Catawba River watershed, including the land that is now Catawba Run. At the time of first European contact, they would have likely looked up to see the mixed-species forest canopy dominated by shortleaf pine. The Catawba Nation depended on these forests for  food, shelter, materials, medicine and spiritual practice.  Shortleaf pine stands have seen a dramatic decrease since European settlement with only 10% of it’s original range remaining. 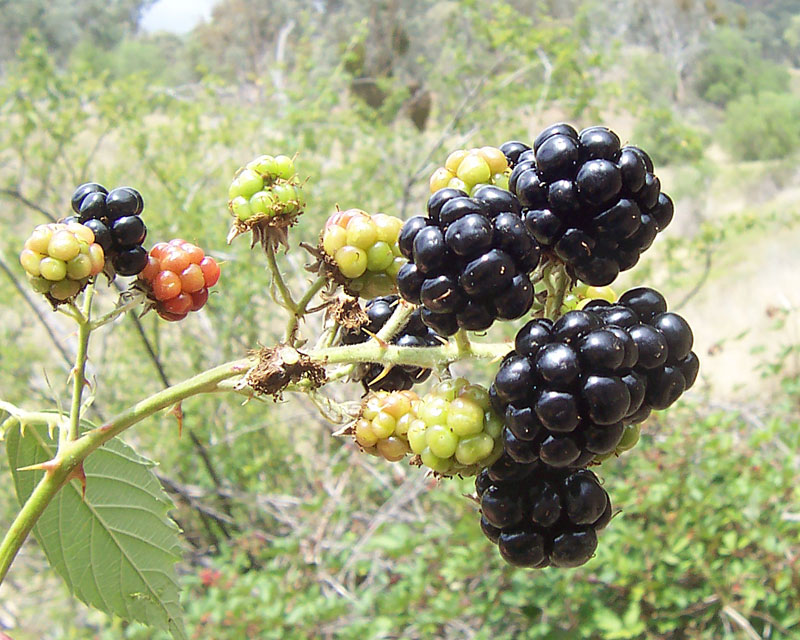 Catawbas have lived on their ancestral lands along the banks of the Catawba River dating back at least 6000 years. First Catawbas were farmers, who grew corn and squash along the river banks, as well as hunted and fished. Catawbas who lived on what is now Catawba Run, likely foraged native blackberries, as well as other fruits and nuts to supplement their crops.

European colonization and settlement of the Piedmont region since the 1600’s shape our forested landscapes of today. Indigenous populations who had inhabited these forests for thousands of years were decimated by disease and eventually driven out by colonists intent on staking their claim to a new life in a new land. Although the Catawba Nation was friendly to the colonists and their villages served as major trading hubs, smallpox epidemics reduced the Catawba population from an estimated 20,000 at first European contact to just 1000 by 1760.  Today, the Catawba Nation has 3300 enrolled members and holds tribal lands in York County, South Carolina.

The diverse and productive mixed hardwood forests of the region were important sources of all kinds of goods the colonists needed to make a home.  Forests were used for foraging wild foods, grazed to raise cattle and pigs, and cleared for homesteads, croplands and orchards.  Forest stands were harvested for construction materials and a diversity of crafted products such as wood handles for tools and furniture for their homes. 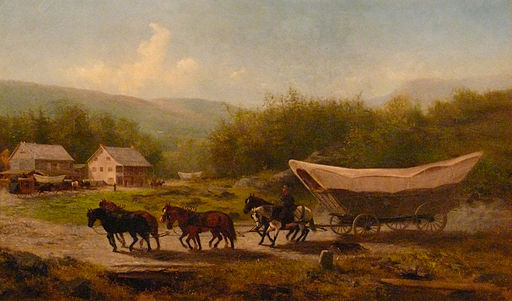 To the left is a depiction of covered wagons used to travel what is contemporarily referred to as “The Great Wagon Road” or “Warrior’s Path.” The road was originally a Native American hunting, trade, and war trail. Europeans travelled from the Northern U.S. to the South to take land and drive out Indigeous people to create colonial homesteads and settlements in the Piedmont and other areas.

The forests of the Piedmont would become a focal point for both domestic and international development over the next 150 years.  In the South, long-leaf or “pitch-pine” trees were essential for naval stores like tar, pitch, and turpentine. Oak was used to make shingles, furniture, flooring, and cabinetry. The large cache of forestland, access to cheap labor, proximity to transportation as well as larger markets set the Piedmont up for an industrial boom that supported the growth and development of industry towns throughout the region. Eventually, the Piedmont and furniture production became synonymous, with the city of High Point North Carolina known internationally as “the furniture capital of the world.” By the end of the Civil War, almost all of North Carolina’s virgin forests had been harvested and replaced with cities and towns, agriculture, managed timber, and unmanaged second and third growth forests.

The damaged and degraded landscapes caused by this rapid growth raised concerns about the future of the region and inspired new thinking about timber management that changed the course of forestry in the region and eventually the nation.  In the late 1800s, just over the mountains in Western NC, George Vanderbilt’s Biltmore Estate became central to shaping modern sustainable forest efforts of today.  Vanderbilt believed it was possible to manage the Biltmore’s forests to provide profitable commercial products while also conserving soil, air and water quality, wildlife and fish habitat, and the beauty of forested landscapes.  He hired trained forester Gifford Pinchot—who would later become the first chief of the United States Forest Service and founder of the Society of American Foresters—to develop the first comprehensive forest management plan in the United States.  The principles and practices of the kind of forestry promoted by Vanderbilt’s Biltmore Forest School rippled across the state, our nation and eventually the world.  Today, Vanderbilt’s “multiple-use” forestry is recognized world-wide as best practice in sustainable forest management.

Catawba Run’s landscape today tells the story of how people have depended on the forests of the Piedmont for their well-being over thousands of years . You can see this story in the  old agricultural fields, and the different kinds of forests on the land which are a combination of unmanaged regrowth from clear-cutting, loblolly pine, and some older native forest.Sustainable forestry practices have also been incorporated over time. For example,some of the land has been managed in recent years to improve conditions for wildlife in order to enhance quail hunting on the property.  young loblolly pine plantations, established a decade ago, are being managed with sustainable forestry practices. 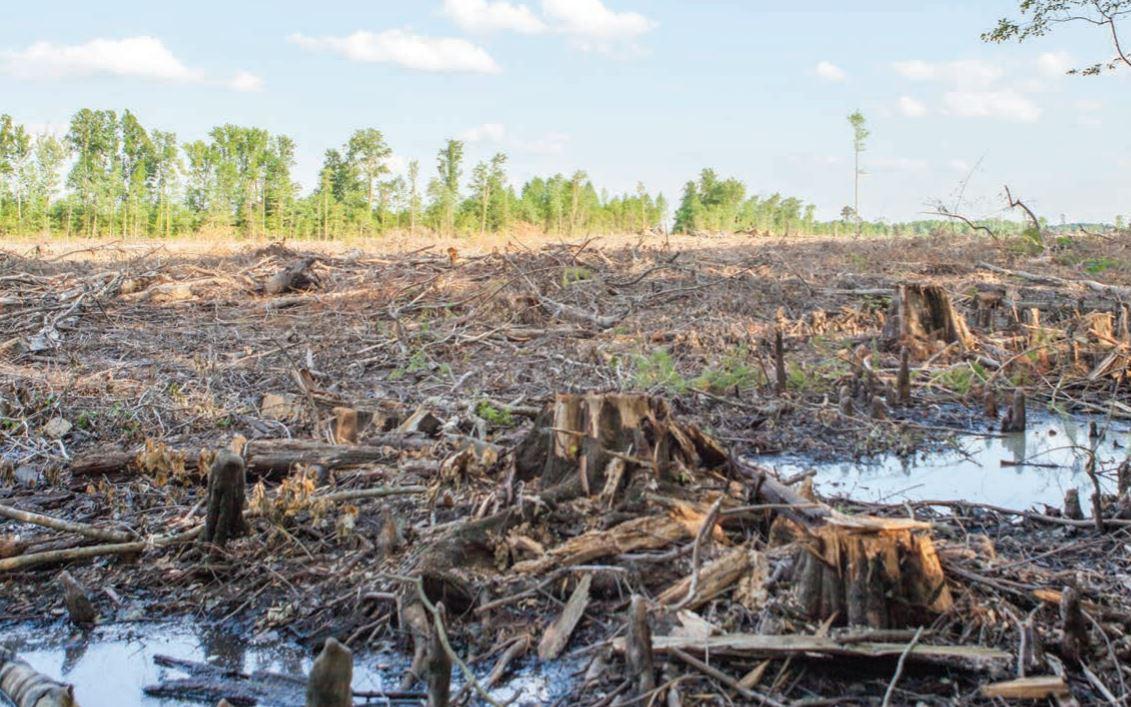 Clear-cutting, pictured above, was the most common industrial forestry practice from European settlement onward. This type of forestry leaves huge swaths of land barren and can deplete tree species quickly. Once cleared, land in the Piedmont was often converted to municipal, industrial, and agricultural uses , rather than reforested. Clearcutting remains a modern day forestry practice in North Carolina and the U.S today. 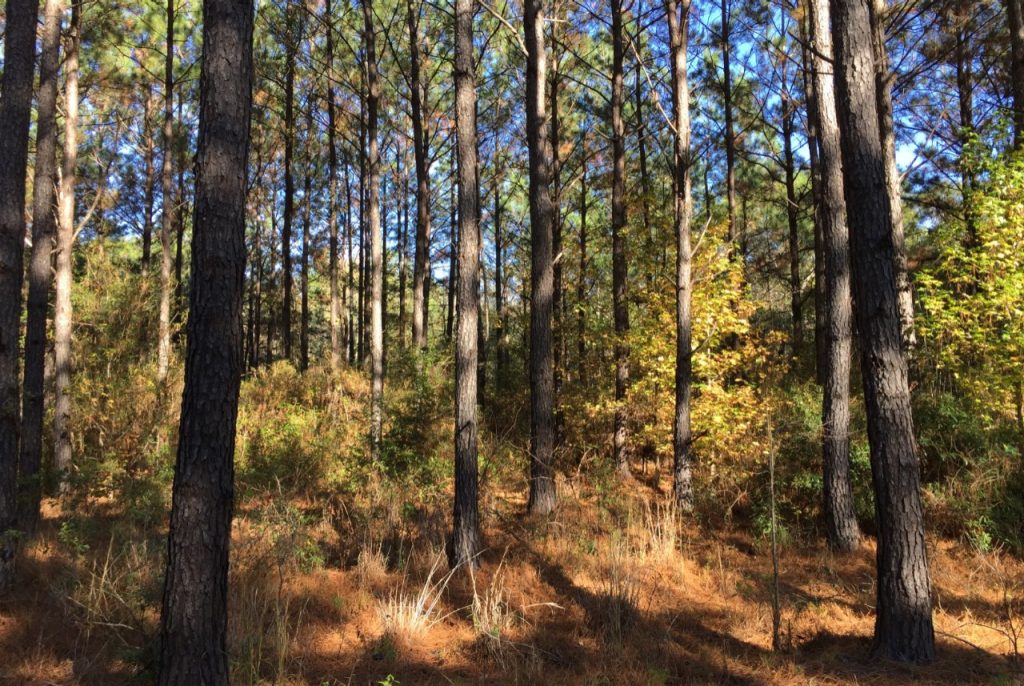 Today, most of the state’s forests are owned by private organizations or individuals, with only 11 percent owned by the forest products industry. Government and public forestlands have also emerged, creating spaces for recreation, education, and conservation. This shift in forest ownership from industry to individuals and organizations presents new opportunity for small-scale land management with forest restoration, sustainability, and resilience in mind.

At Catawba Run, we are bringing resilience to the forefront through our management practices which reflect our shared values to respect, care for, and restore the land. Over the next ten years, we will work to create healthy, productive, and diverse forests within a beautiful landscape that promotes the health of people, plants and animals, and the planet.  Our forest management plan is designed to preserve the remaining patches of old-growth forest, produce native short-leaf pine, loblolly pine and mixed hardwoods for commercial production, provide high quality forage for livestock to graze among the trees, and promote an abundance of wildlife.

While planning and implementing reforestation at Catawba Run, we worked with foresters to select ecologically sound forest renovation practices. For example, we use a method of forest clearing – drum chop – that is not typically used in the Piedmont. It is well-suited to our goals because it leaves the soil intact, reducing environmental impact of clearing and aiding reforestation efforts. We selected slash pine for reforestation because it is a native species that is resistant to fire, grows rapidly, and is a commonly used agroforestry species. Once a dominant pine in the southeast Piedmont, slash pine is a more adaptive choice of planting for a changing environment that has and is more likely to see increased fire pressure due to climate change. Reforestation of slash pine also  protects the surrounding community as it is less likely for Catawba Run to start or carry a forest fire. 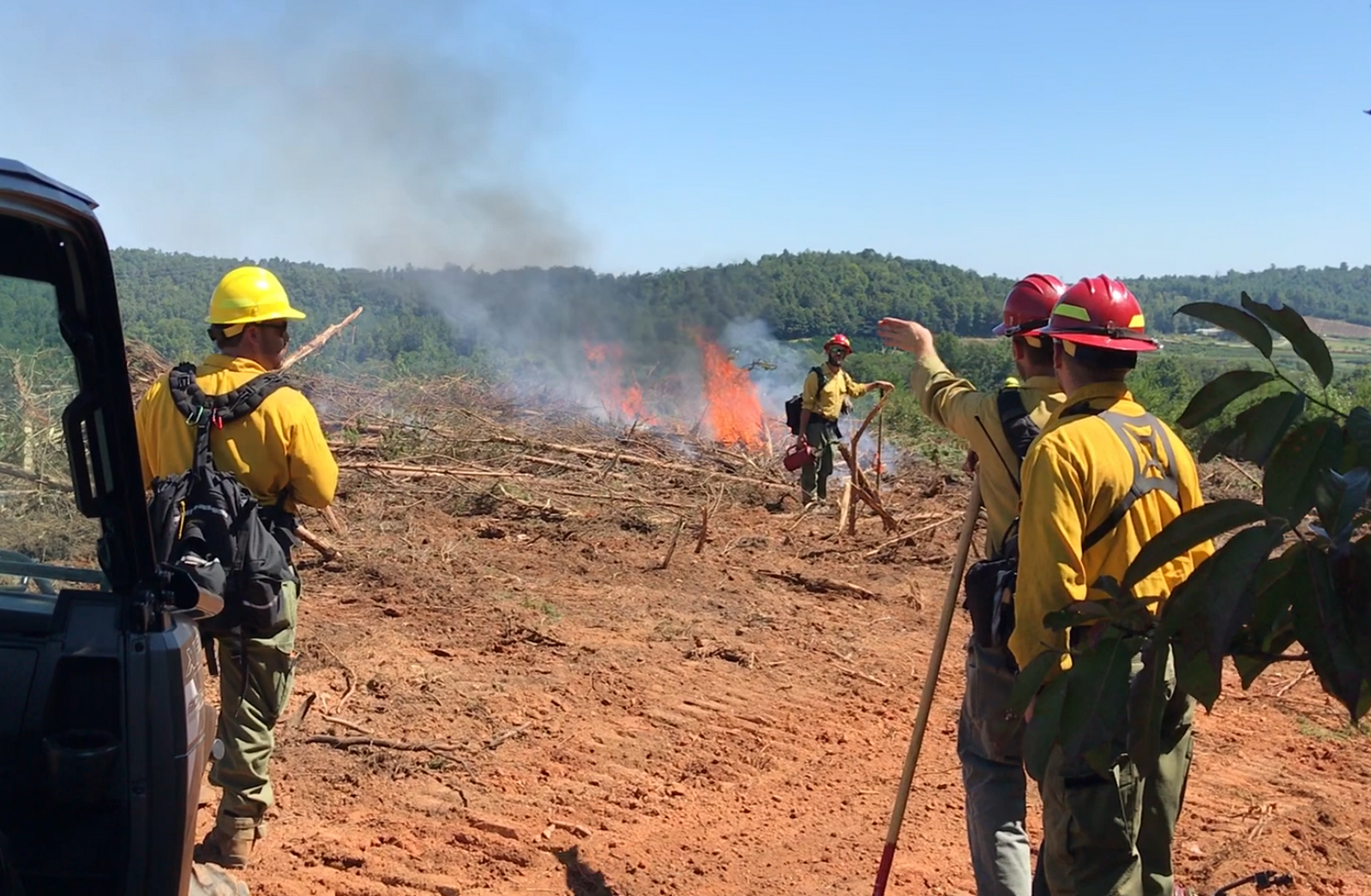 Workers discuss progress as our first chop and burn treatment gets underway at Catawba Run! This method of clearing trees for reforestation is less disturbing to the soil. Want to learn more? Check out our blog post here.

Restoring the diversity of forest types using sustainable forestry practices is just one way that we hope Catawba Run can encourage and inspire more sustainable and resilient forest management in the Piedmont region.  One day soon, Catawba Run will invite visitors to listen to the story of this land, to walk through new healthy forests as well as old-growth, explore the possibility that productive, profitable landscapes can also be beautiful, and to take home new ideas. Whether it is looking up through the diverse tree canopy, feeling the topsoil beneath your feet, or picking the first ripe blackberry for yourself, your family, or your friends, Catawba Run will allow people to experience the sights, sounds, and smells of Piedmont forests through the ages – from the time of the Catawba Nation, to the possibilities of our sustainable and resilient future.

The Shortleaf Pine Initiative is a broad range of public and private organizations, as well as key state and federal agencies currently working in the shortleaf pine ecosystem. The shortleaf pine is the most widespread pine species in the Southeastern U.S. but has been rapidly declining in numbers due to deforestation and other factors.

The Biltmore Estate is considered the “Birthplace of American Forestry.” George Vanderbilt hired European landscapers and foresters to transform is 125,000 acres into commercial forest land while maintaining the  health and integrity of  the forest.