Traditional Foods of the Piedmont: Ramps 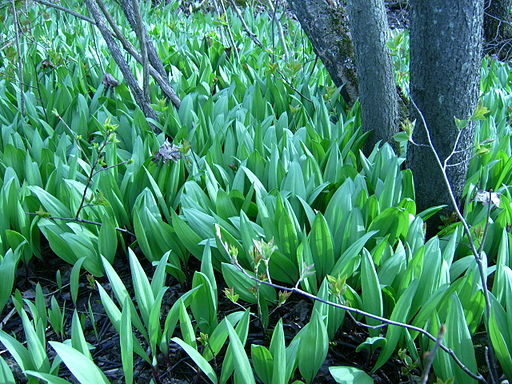 The ramp, or wild leek, belongs to the same pungent genus as onions, chives, and garlic. The ramp’s odor is something akin to that of garlic and onion, but distinguishes itself by its persistence and its occasionally musty flavor. Ramps are native to the woodlands of eastern North America, ranging from Canada, south through New England and the Appalachian states, and as far west as Iowa.

Ramps have been an important and welcome addition to the early spring menu for many peoples who have called the Piedmont forests home.  Native Americans and European settlers alike looked forward to the wild green taste of ramps as one of the  first forest edibles to emerge in the early spring. The fresh and tender-green leaves with their strong flavor were an improvement on the bland winter fare of dried fruits, nuts, beans, and meat. Ramps were regarded as a spring tonic that cleansed the blood and healed winter ailments. Juice from the strong summer bulbs was also used to treat coughs, colds, earaches, and bee stings.

In late winter or very early spring, each bulb sends up two or three broad smooth leaves through the leaf litter on the forest floor. Eventually growing 8 to 12 inches tall, these leaves show deep maroon streaking at the base and up along the parallel veins. As the forest canopy leafs out and shades the ground, the ramp’s leaves wither and die, leaving only a single bud on a naked stalk. This bud opens in June or July to form creamy white flowers that produce seeds by late summer. Ramps reproduce by both bulb offsets and seeds, and large colonies can blanket a hillside.

Ramps are still popular in the rural upland cuisines of throughout their native region and in recent years have grown in popularity in restaurants throughout North America. The plant is adaptable to numerous cooking styles. In central Appalachia, ramps are most commonly fried with potatoes in bacon fat or scrambled with eggs and served with bacon, pinto beans and cornbread. Ramps can also be pickled or used in soups and other foods in place of onions and garlic.

Over the past two decades, the growing popularity of ramps has dramatically increased over-harvesting throughout the plant’s range. Ramps are slow to reproduce and populations take years to recover from any degree of harvesting; however, sustainable foraging of wild ramps is possible and ramps can also be successfully cultivated.

Foragers can avoid harvesting from small patches and when harvesting from a large patch, take only 1 in 5 ramps. Harvest by slicing through the bulb to take only the top third of the bulb, leaving the rest of the bulb and roots in the ground. Avoid taking plants with flower buds. If you are buying ramps at a local market, you can promote sustainable harvests by doing three things: 1) ask the seller how and where they harvested their ramps; 2) buy ramps with very fresh green leaves and partial bulbs; and 3)  refuse to buy whole plants that include roots.

You could also avoid buying foraged ramps completely and instead grow your own. Hardy in zones 3 to 7, ramps demand a particular woodland habitat: shady and damp (at least 35 inches of rainfall throughout the year), with well-drained, acidic, calcium-rich soil. Trilliums, trout lilies and mayapples favor these same conditions, so if you notice an area where those plants thrive—probably under the shade of beeches, maples, hickories or oaks—you’ve found a place ready-made for cultivating ramps.

Ramps: How to Forage and Eat Wild Leeks Wild Edible